WinningWP content is free to all. If you make a purchase through referral links on our site, we earn a commission (learn more).
Tags – caching, WP Fastest Cache, WP Rocket

WP Fastest Cache vs WP Rocket – Which Is The Best WordPress Caching Plugin?

Trying to choose between WP Fastest Cache and WP Rocket?

If you want to speed up your WordPress site, these are two of the more popular caching/performance plugins you’ll encounter — so, which one is better?

Well, as you’ll see in this comparison, both are excellent plugins that can help you to implement page caching — plus a whole lot of other performance tweaks.

However, there are some small differences that may push you one way or another, which is what I’ll show you by running performance tests and comparing these plugins in other ways.

I’ll start with a table that compares some of the features. Then, I’ll go over the performance data and give you a tour of the interfaces.

Here are some other minor differences:

Second, WP Rocket now offers its own CDN called RocketCDN, but it costs an extra $7.99 a month. Both tools can help you to integrate with external CDN services.

WP Rocket also has partnerships with some managed WordPress hosts that let you use it even if your host blocks most caching plugins.

For example, Kinsta blocks caching plugins (including WP Fastest Cache), but still allows WP Rocket, thanks to this partnership. In some situations, this can get you a nice performance boost, as we’ve written about here:

To compare WP Fastest Cache and WP Rocket’s performance, I set up a fresh test site built with the Astra theme (our review) and the Elementor page builder plugin (our review). More specifically, I’m using one of the pre-made importable demo sites — here’s the exact demo site that I’m using.

As for hosting, my test site is hosted on a cheap $5-a-month cloud VPS from DigitalOcean. It may be cheap, but this setup is actually pretty speedy all by itself.

This should give a pretty ‘representative’ test scenario, as this combo of Astra and Elementor is one of the most popular ways for people to build websites in 2020.

With this test site, I tested four scenarios:

At the end of this section, I’ll share the exact configuration I used for each plugin, so you know how I’m using them. In general, I tried to take advantage of as many features as possible in each scenario to create the ‘optimal’ setup — without using features that could cause issues (such as script optimization).

For each of the four scenarios, I used WebPageTest to run nine separate tests to eliminate single-test variability. Then, I took the median value of those nine tests for each scenario.

I did this three separate times on different days — so, three separate test runs, with each run collecting nine separate data points and taking the median value of those nine tests. Overall, that’s 27 different test points for each scenario, which should give us reliable data.

My other WebPageTest settings are as follows:

With that housekeeping out of the way, let’s dig into the data!

How I Configured the Plugins

Here are the settings I configured for each scenario:

I enabled everything in the free version test, as well as the following settings:

Comparing the Interface and User Experience

Performance is the most important comparison, but you also want a tool that’s easy for you to use and set up, so let’s look at that next.

Overall, in terms of interface and user experience, I’d definitely give the edge to WP Rocket.

With WP Fastest Cache, most of the settings are held in one list in the Settings tab; it doesn’t enable anything by default — you have to manually enable each feature you want to use.

You can enable them by checking the box, and, if you’re not sure what a specific setting does, you can click the information icon to open a new tab that takes you to a page that explains the setting.

It’s a minor thing, but I find it a little inconvenient to have to open a new tab for each explanation. 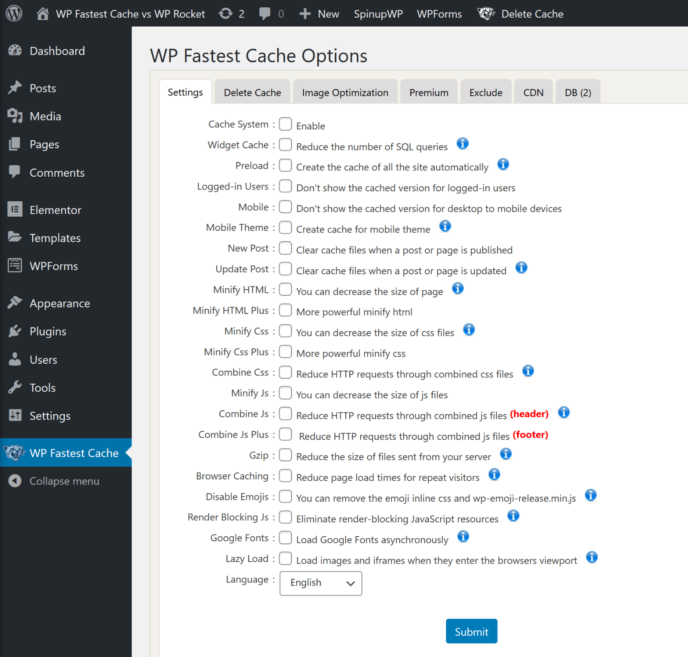 For some settings that require further configuration, WP Fastest Cache will display a popup where you can make additional choices.

For example, if you tell WP Fastest Cache to clear the cache when you publish a new post, it’ll display a popup where you can choose specific parts of the cache to clear: 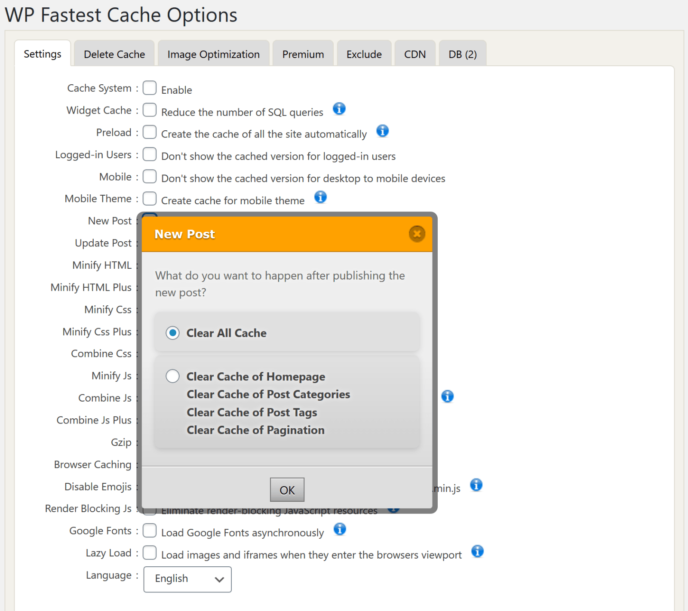 If you want to configure cache exclusion rules, you can go to the Exclude tab to set them up: 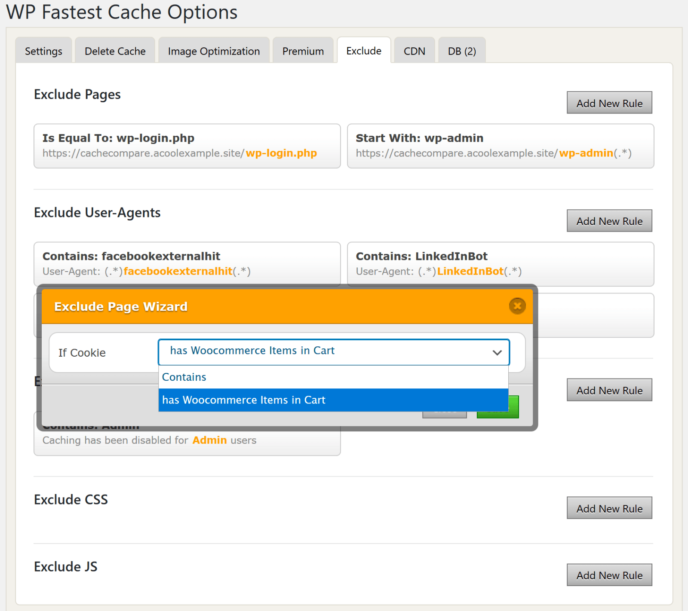 To clear your cache, you get several options: 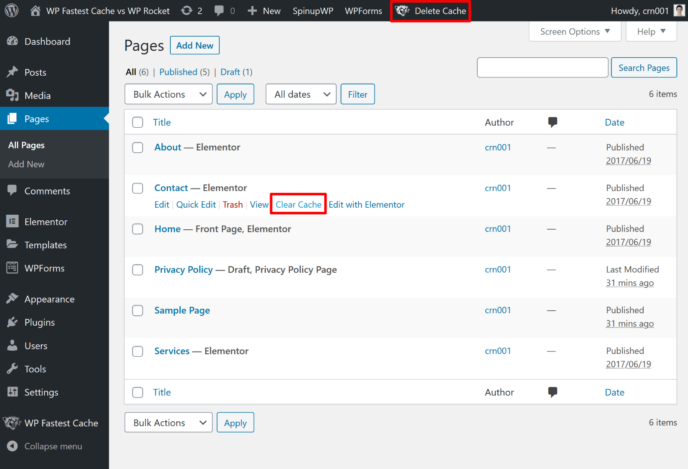 As soon as you activate WP Rocket, it automatically activates some of the most important features. These are:

To configure additional settings, you can use the tabs on the left: 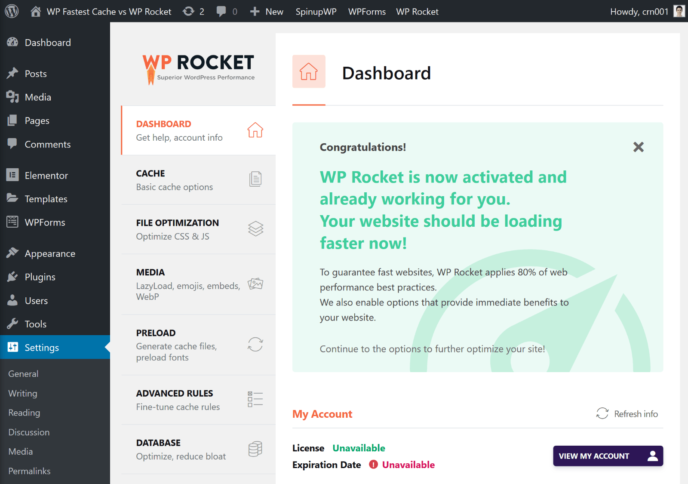 Like WP Fastest Cache, WP Rocket also includes in-dashboard links that explain each feature. However, two of the reasons why I find WP Rocket to be more user-friendly are:

Again, this isn’t a huge deal, but, if you’re a casual user, I think you’ll find this approach to be a lot more user-friendly, because there are a lot of settings to go through. On the other hand, if you already know what every setting means, you probably won’t care either way. 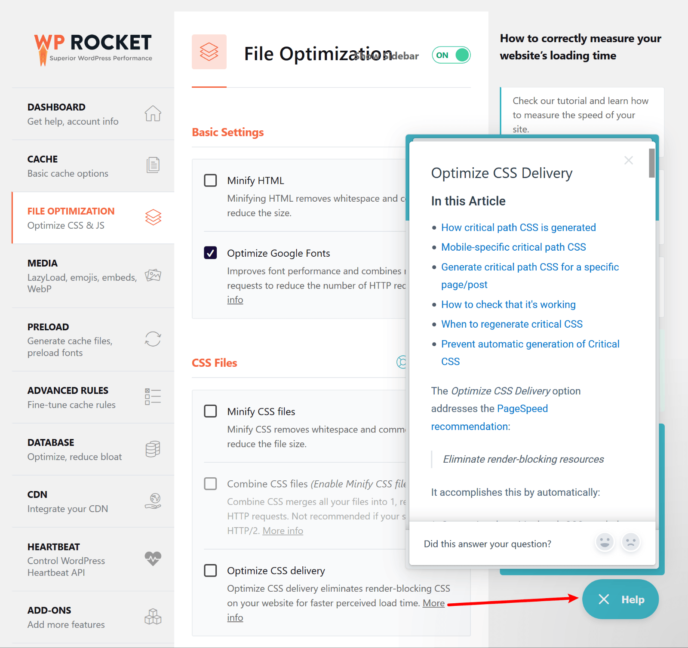 Another reason why I like WP Rocket for casual users is that it provides warnings for settings that could potentially break your site.

For example, if you enable JavaScript minification, WP Rocket will warn you that it may cause issues, and all you need to do is deactivate the setting to make your site go back to normal.

This can prevent those ‘Oh crap, I just broke my site!’ panic moments. 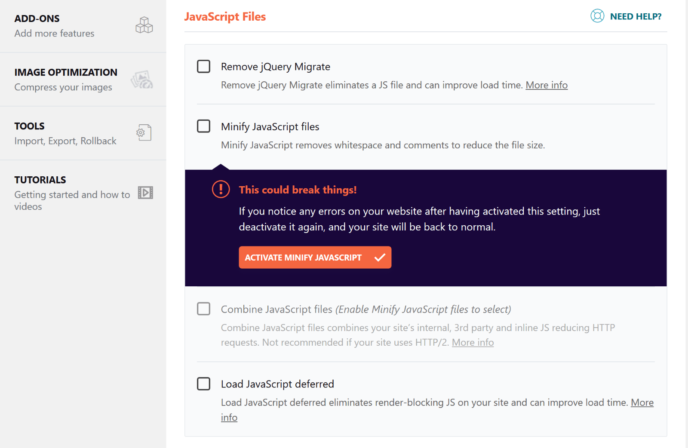 If you’re an advanced user, you can set up your own custom caching exclusions from the Advanced Rules tab: 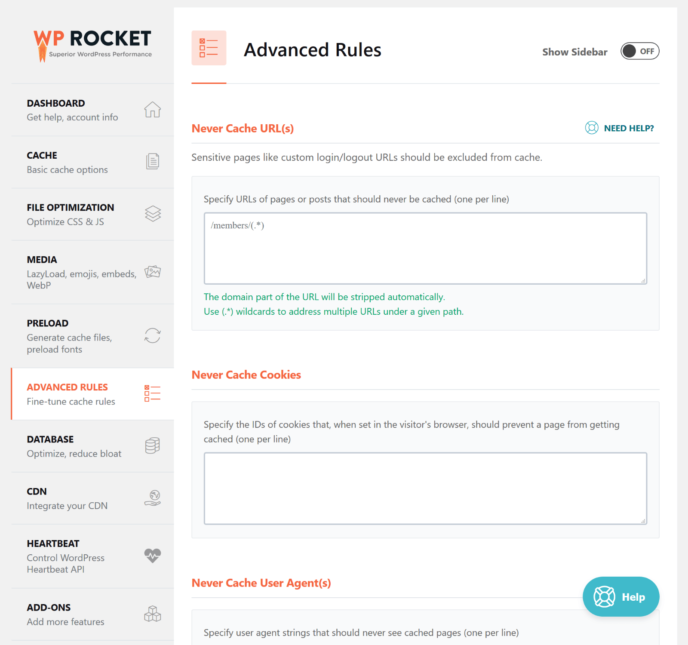 To clear your site’s cache, you get two options: 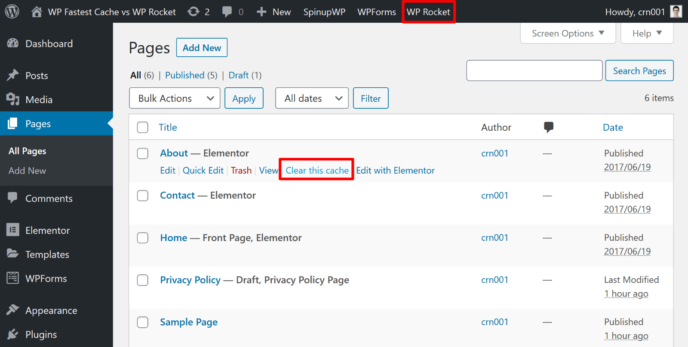 There are some big differences in pricing strategies, which may be another thing that pushes you in one direction.

First, as I mentioned earlier, WP Fastest Cache has a free version at WordPress.org, whereas WP Rocket only comes in a premium version.

However, when it comes to the paid versions, WP Rocket is more affordable if you need to use the plugin on multiple sites.

The big difference there is obviously the unlimited site license. While the prices are identical for a single site, WP Rocket will be a lot cheaper if you need to use it for more than three sites, because it offers an unlimited license, whereas WP Fastest Cache doesn’t.

However, there’s one more wrinkle here: When you purchase WP Rocket, you’re paying for one year of support and updates. After that, you can continue to use the plugin on all of your sites, but you’ll no longer receive updates or support unless you renew (at a 30% discount).

But with WP Fastest Cache, you get lifetime updates with your purchase, which is a pretty sweet deal if you’re planning to use the plugin for a long time.

WP Fastest Cache vs WP Rocket: Which Should You Choose?

Personally, I think these are two of the best WordPress caching plugins, so I don’t think you’ll make a bad decision either way.

Obviously, with a caching/performance plugin, how much the plugin improves your site’s load times should be the biggest consideration.

To recap, here are the overall average load times from all of the tests I ran:

Remember, my baseline site is already using DigitalOcean, which is pretty speedy. I think this is a big part of why you don’t see the dramatic improvements you’ll often see when you use page caching with cheap shared hosting.

Beyond performance, I’d summarize the other high-level differences as follows:

WP Rocket’s pros and cons are basically the opposite, but let’s go over them to drive home the point.

Overall, I’d give the edge to WP Rocket as the ‘best’ plugin, because it had better performance numbers and is more user friendly — especially for casual users. I think the well-designed interface, plus the built-in plugin/host integrations to avoid caching issues, makes it super easy to use.

However, if you’re price-sensitive, WP Fastest Cache is also a fine option that comes in a free version and gives you lifetime updates with the premium version. The free version has a near-perfect 4.9-star rating on more than 3,100 reviews at WordPress.org, so you certainly won’t go wrong there.

However, if you’re going Pro, I’d recommend WP Rocket, unless you put a lot of value on the lifetime updates that WP Fastest Cache Premium offers.

Used/using either of these plugins? Questions?

Colin Newcomer is a freelance writer and long-time Internet marketer. He specializes in digital marketing and WordPress. He lives a life of danger, riding a scooter through the chaos of Hanoi.