WinningWP content is free to all. If you make a purchase through referral links on our site, we earn a commission (learn more).
Tags – Ghost, Kickstarter

For the last month or so there’s been a project over on Kickstarter that’s already made quite a ripple in the world of blogging – say hello to Ghost! What is Ghost, well, in short, it’s a simple, elegant, open-source blogging platform that’s fun to use… that isn’t WordPress. Since its inception back in 2003, WordPress has gone from strength to strength – maturing into something that’s now generally regarded as a full-blown CMS capable of, well, all sorts… however, as a result of becoming all things to all men, its focus has naturally shifted away from catering only to bloggers – which is where Ghost comes in. Ghost aims to be something simpler, cleaner and perhaps most importantly (for bloggers): a platform focused on making writing pleasurable and publishing a breeze.

Created by John O’Nolan and team, Ghost makes things simpler from the get go, by centering around a stunning dashboard that shows users everything they need to know about their blog in one place. 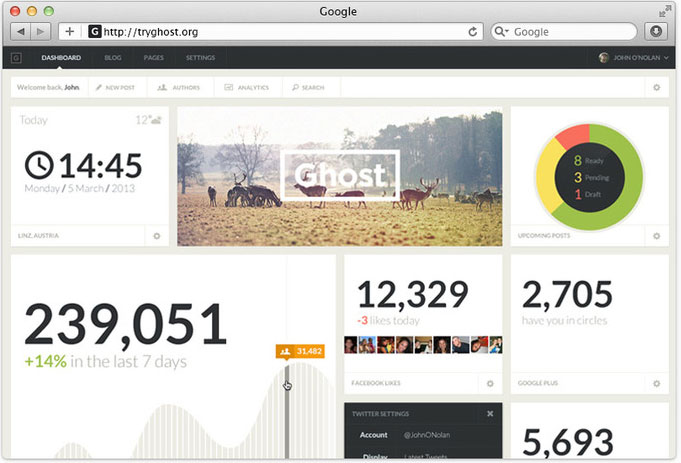 Further, instead of having to write something blind, i.e. without being able to see how it will actually look when published without first having to change to another window to view it, Ghost lets users view the formatting of their post as they type by employing a split screen approach – write on the left, and view how it will actually render on the right – in real time. What’s more, instead of having to fiddle with clunky formatting buttons or – worse still – HTML (something many WordPress newbies think they can’t possibly learn [if only they knew how easy it is to pickup…but that’s a topic for another post]), Ghost employs the arguably much simpler approach of employing Markdown. 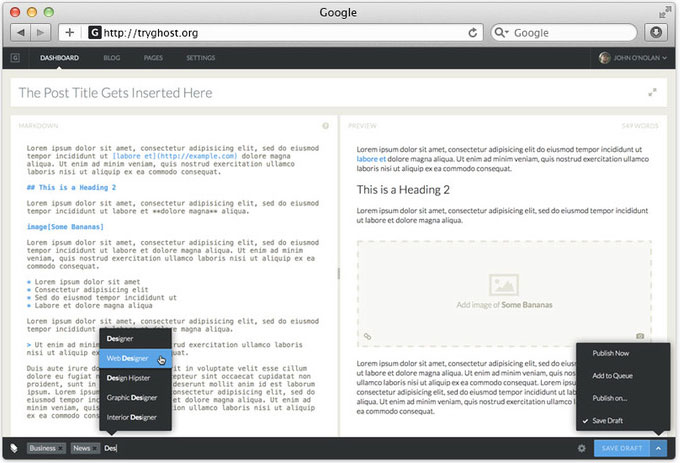 When it comes to responsive design, WordPress isn’t exactly ahead of the curve, I mean, sure, on the frontend side of things there’s plenty of fully responsive themes to use (some of which are nothing less than stunning!), but from a backend perspective there’s still a way to go – if you’ve ever tried writing posts or changing settings etc on a mobile device, then you’re probably hoping things get better soon (which they no doubt will of course). Ghost, however, has the advantage of coming into existence after the rise of mobile, meaning it’s been designed to work well with mobile devices from the ground up… sweet! 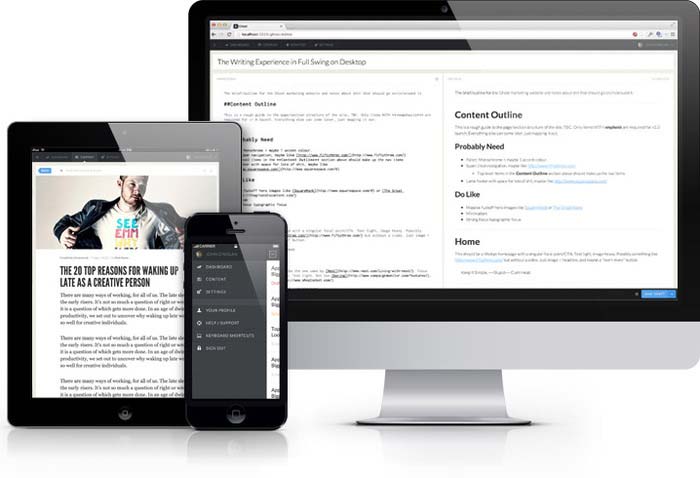 In similar fashion to WordPress, Ghost will be fully customizable, meaning developers will be able to write themes and plugins – which they’ll then be able to either give away for free or sell etc. Plus, the code will all be openly released under the MIT license with no restrictions.

So who’s going to fund Ghost? Well, for starters, in similar fashion to WordPress (and let’s face it, WordPress have no trouble when it comes to funding), Ghost will provide a paid hosting service (those who choose to selfhost Ghost need not be a part of this of course); however, that’s all down the line. Before Ghost can generate its own sustainably cashflow, there’s all the development/startup costs to worry about… but let’s not waste time speaking about the funding site of things any further, because such financial worries are all old hat! How so? Because as of the 28th May 2013, Ghost is now one of the most overly funded open-source Kickstarter projects out there – having raised a whopping £196,362: nearly eight times their initial goal of £25,000… exciting stuff! 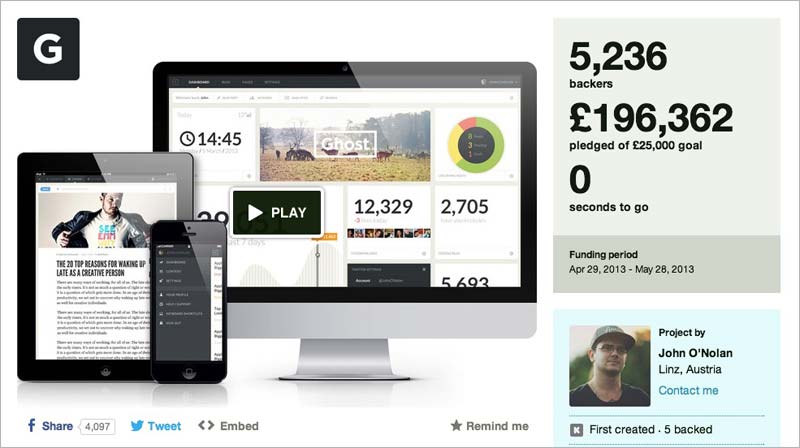 Well, it wouldn’t be right to introduce Ghost without mentioning one of the most important things about it: namely, that Ghost is to be set up as a not-for-profit organization – meaning the team’s motivation for making it isn’t to make big bucks:

Good luck guys! Here’s to “pushing blogging and journalism to the next level!”. Spend all that Kickstarter money (including my tenner) wisely!