WinningWP content is free to all. If you make a purchase through referral links on our site, we earn a commission (learn more).
Tags – DreamHost, DreamPress 2, managed WordPress hosting

Managed WordPress hosting is a big deal — so it’s no surprise then, that just about every hosting company offering these types of services is continuing to iterate and improve on them to try and get ahead of its rivals. One such hosting provider — one of the biggest in the business in fact — is DreamHost.

DreamHost first ventured into the managed WordPress hosting market back in mid-2013, with a service dubbed DreamPress. However, by the time DreamPress was officially launched, it was already a little outmatched by some of its rivals and never really seemed to receive as much attention as it perhaps deserved.

This time, DreamHost is back with DreamPress 2 — a much stronger product boasting a number of features of considerable interest: such as VPS only servers, PHP 5.5, OpCache and optional HHVM (currently in beta).

Let’s fire one of these new systems up, create a brand new site and do a little testing…

In operation since 1997, DreamHost is one of the longest-standing and best-known hosting companies around — and even before their initial DreamPress release, they’d already gained loads of WordPress-related experience via their already well-established shared, VPS (a service that got a new lease of life last November) and dedicated services. In light of this, it’s pretty reasonable to expect this, their second attempt, to be something really rather good! Let’s take a look:

The interface for the new DreamPress 2 service is extremely simple. It’s really just an addition page with a few submenus bolted onto DreamHost’s own web hosting customer dashboard — which is neither pretty nor particularly easy to navigate (although still quite a bit better than the usual cPanel-type interfaces used by many other hosting companies**). Compared to that of, say, Media Temple or Flywheel, it’s really an all-around less aesthetically-appealing experience. That said, it does however, do the job it was designed to do — albeit without much finesse. 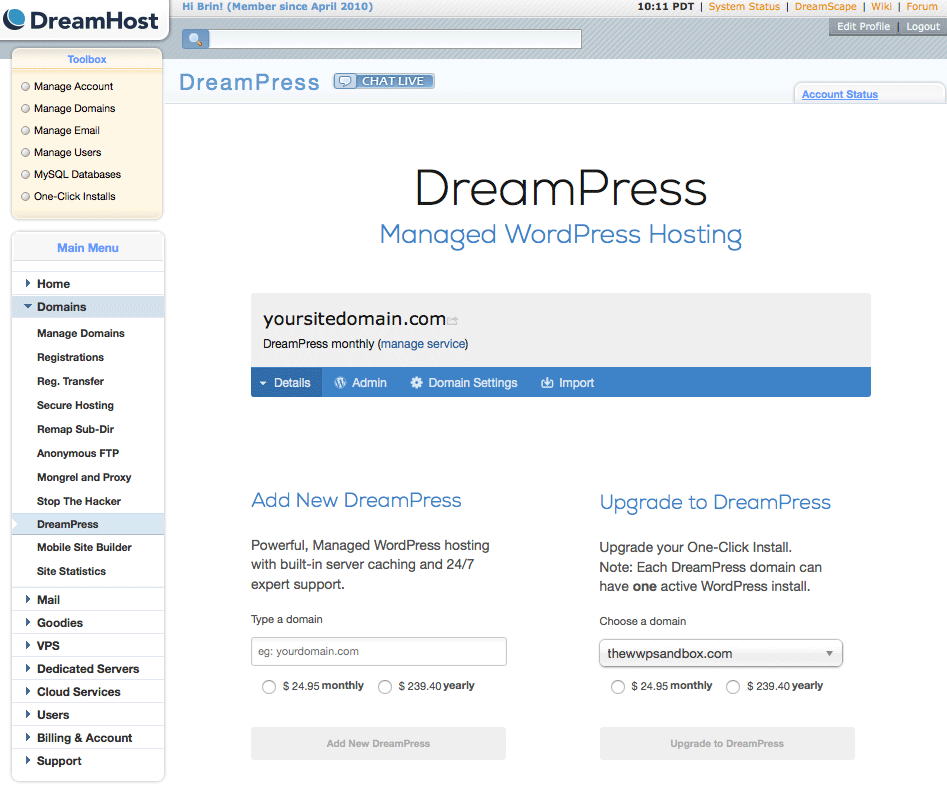 …Hmmm. Still, luckily, this isn’t an interface you’ll be needing to use all that often. Instead, the more-important interface is the actual WordPress dashboard — which is largely unrelated. So let’s move on.

Unlike most specialist WordPress hosting providers, DreamHost is also a domain registrar — meaning you can both register a domain with them AND have them host your website. This makes setting up a brand new website (with a brand new domain) with them an absolute breeze! What’s more, DreamPress 2 also comes with an unlimited number of email accounts — so that’s that taken care of out-of-the-box too!

Regardless of whether your domain is registered with them or not, there’s nothing complicated about getting started with DreamPress 2. WordPress is automatically installed on each new plan and takes about 40-45 minutes to be fully up and running on your account. Easy!

Speed is one of the more critical factors of a high-performing website. Making visitors wait more than a few seconds to see your content is a real no-no! This is, partly, where the true value of managed WordPress hosting comes into play, and on this score DreamPress 2 doesn’t disappoint.

How fast is it?

Running a number of speed tests on an entirely as-out-of-the-box site (i.e. a brand new WordPress install with none of the settings changed, no additional plugins and nothing but the default Twenty Fifteen theme installed) load times for the front page come out somewhere in the region of about between 0.5 and 1.2 seconds*** with an average page load speed of 0.8 seconds (according to our tests)! Here’s our almost-entirely-out-of-the-box**** test site — should you wish to run it through say GTMetrix or Pingdom for yourself: http://webhostingspeedchecks-drmprs2.com (update: site now offline).

…which is really just about as fast as I’ve seen any comparable service perform to date!

Sadly, the only real test for security is whether or not a site (and in fact the hosting company themselves) stands up to a well orchestrated attack. DreamHost writes:

“In addition to the automatic WordPress core updates and daily backups, we have a WordPress tuned Web Application Firewall (WAF), Fail2ban to protect against brute force logins, DDoS auto-mitigation and we work directly with the WordPress security team to proactively protect your WordPress site against emerging threats.”

Having only just set up a brand new site on DreamPress 2 and with no other source of data to work with, I can’t really comment on uptime yet. However, I’ll be monitoring this over the next month or so and will update this to reflect what I find… stay tuned!

(update: my uptime results = 99.7% via Pingdom and Uptime Robot monitoring)

When it comes to testing a site’s performance under load, there’s arguably no better tool than Load Impact. For those who aren’t already aware, what this tool does is allow you to map the effect of sending an increasing number of virtual users to a site over a predefined time frame, thereby simulating how a site’s performance varies with increased load. Using this tool to send from 1 to 250 concurrent users to our above-mentioned test site over the course of 10 minutes gives impressive results (although admittedly our test site is about as basic as a WordPress-powered website can be). I won’t bore you with the details, but suffice it to say that our test had essentially no effect on the site — with our virtual load times remaining significantly below just 75ms throughout (following an initial caching phase — see here for full results)! Note: If you’re in any doubt how good these results are, try running a similar test for yourself on just about any other site you fancy.

The promise of up to 2.1 million monthly visitors is amazing! DreamHost state:

“We don’t limit the visitors to your site, or have any overages for traffic… …we took a look at the performance of DreamPress 2 using loader.io, an independent benchmarking tool. This estimate is based on 50-100 un-cached visitors per minute (averaging 3 page views each) on a basic WordPress install filled with content. Under most circumstances, your site will be able to sustain significantly higher traffic levels due to DreamPress 2’s multilevel caching systems.”

Allowing users capacity for up to 2.1 million monthly visitors to their sites for just $25 a month is incredible considering both WPEngine and Flywheel (two of the current leading services in the managed WordPress hosting business), for example, both offer capacity for just 25,000 visitors per month for $30/month! Is this kind of promise too good to be true? I’ve personally seen such promises before from some other web hosting companies that haven’t lived up to their word in quite the way you’d expect — I’d be interested to learn more about whether or not a site powered by DreamPress 2 can in reality take such high traffic loads, but I’ve no way of really testing this with any certainty…

What it doesn’t offer:

Some of its competitors offer a few additional selling points. Things such as considerably more attractive and easier-to-use user interfaces, website staging options, free migrations, completely integrated CDN services, client billing transfers, free demo sites, automated malware scans and a choice of server location (note that all of DreamHost’s data centers are US based). That said, most of these “additional” features will appeal only to developers rather than to the vast majority website owners: I’m really only mentioning them here as it’s good to know, in my opinion, a little on what else is out there (just in case you weren’t already aware).

It looks like DreamHost may at last have a really very competitive — and extremely fast — WordPress-specific package to put them on the managed-WordPress-hosting map. As such I’ll be keeping an eye on them more keenly from now on. The promise of HHVM is somewhat ahead of the curve (although admittedly this is still in beta) and it’s nice to see DreamHost once again pushing the boundaries. All in all, as long as you’re not expecting a brilliant or beautiful user interface to work with and can do without a few of the more developer-focused features offered by some of the other leading managed WordPress hosting providers (see above paragraph for a few specific examples), then DreamPress 2 appears to perform really rather well. AND if it really does live up to the promise of providing even anywhere near capacity for 2 million visitors a month, then it could well prove an incredibly good-value-for-money option for many medium to even-relatively-large-scale businesses!

Visit the official DreamPress 2 page on the main DreamHost website at http://www.dreamhost.com/hosting/wordpress/

*Average getting-through-to-this-instant-chat-support times (based entirely on my own experience) of about 10 to 15 minutes.

**In my humble opinion.

***Using all of GTMetrix’s default settings and testing from Dallas rather than the default Vancouver (since our test site’s server is physically located in DreamHost’s Virginia data center — rather than Canada).

****Literally all we’ve done is turn all comments and pingbacks off (to avoid spam comments and keep things entirely as standard).

Using DreamPress 2 yet? Anything to add? Let us know in the comments!