WinningWP content is free to all. If you make a purchase through referral links on our site, we earn a commission (learn more).
Tags – DreamHost, Nginx

Just as I was beginning to think one of my all-time favorite hosting companies, DreamHost (whom I’ve been hosting a number of personal websites with for well over five years now) were beginning to get a little left behind by all the new competition that keeps appearing in the world of web hosting, they’ve launched a spiffing new website, a brand new managed WordPress hosting plan named DreamPress and now — most interesting to me at least* — brand new managed VPS hosting plans with SSDs.

How do these new VPS plans compare to their old counterparts?

First off, let’s compare the old with the new in terms of what’s perhaps most important: Cost, Speed and Reliability…

Needless to say, you’d expect the new VPS plans with their shiny new SSDs to be quite a bit quicker! Here’s a quote from DreamHost: “Our VPS servers use SSD hard drives and are 20x faster than traditional SATA disk drives”! Plus, as already mentioned in the intro, in addition to Apache, these new VPS plans also offer Nginx — thereby making them potentially quite a bit faster still!

DreamHost report these new plans have an uptime of 100% (up from 99.99% for the previous plans). Can’t really ask for better than that!

Enough chit chat – let’s give these new plans a bash…

With WordPress running on Apache

Here’s what a typical GTMetrix report has to say about it:

Quick summary: Rather than test just once, we ran the GTMetrix report ten times – which gave us an average load time of 2.99s seconds.

– however, since GTMetrix reports depend on a number of different variables that are, in fact, continually varying, feel free to do a few tests of your own – on GTMetrix, PageSpeed Insights, WebPagetest or Pingdom, etc, etc (more on these tools here).

Here’s what a typical GTMetrix report has to say about this site:

Quick summary: Rather than test just once, we ran the GTMetrix report ten times – which gave us an average load time of 2.48 seconds.

With WordPress running on Nginx

Plus, as an added bonus, here’s another bog-standard, out-of-the-box WordPress install running on one of the new DreamHost VPS plans — this time on Nginx (with the same 1GB of RAM and SSDs as above): http://webhostingspeedtests-dh-vps-new-nginx.com (update 15th December 2014: site now offline – couldn’t keep it running forever!).

…and here’s what a typical GTMetrix report has to say about this one:

Quick summary: Again, rather than test just once, we ran the GTMetrix report ten times – which gave us an average load time of just 1.1 seconds – WOW!

Results in a graph: 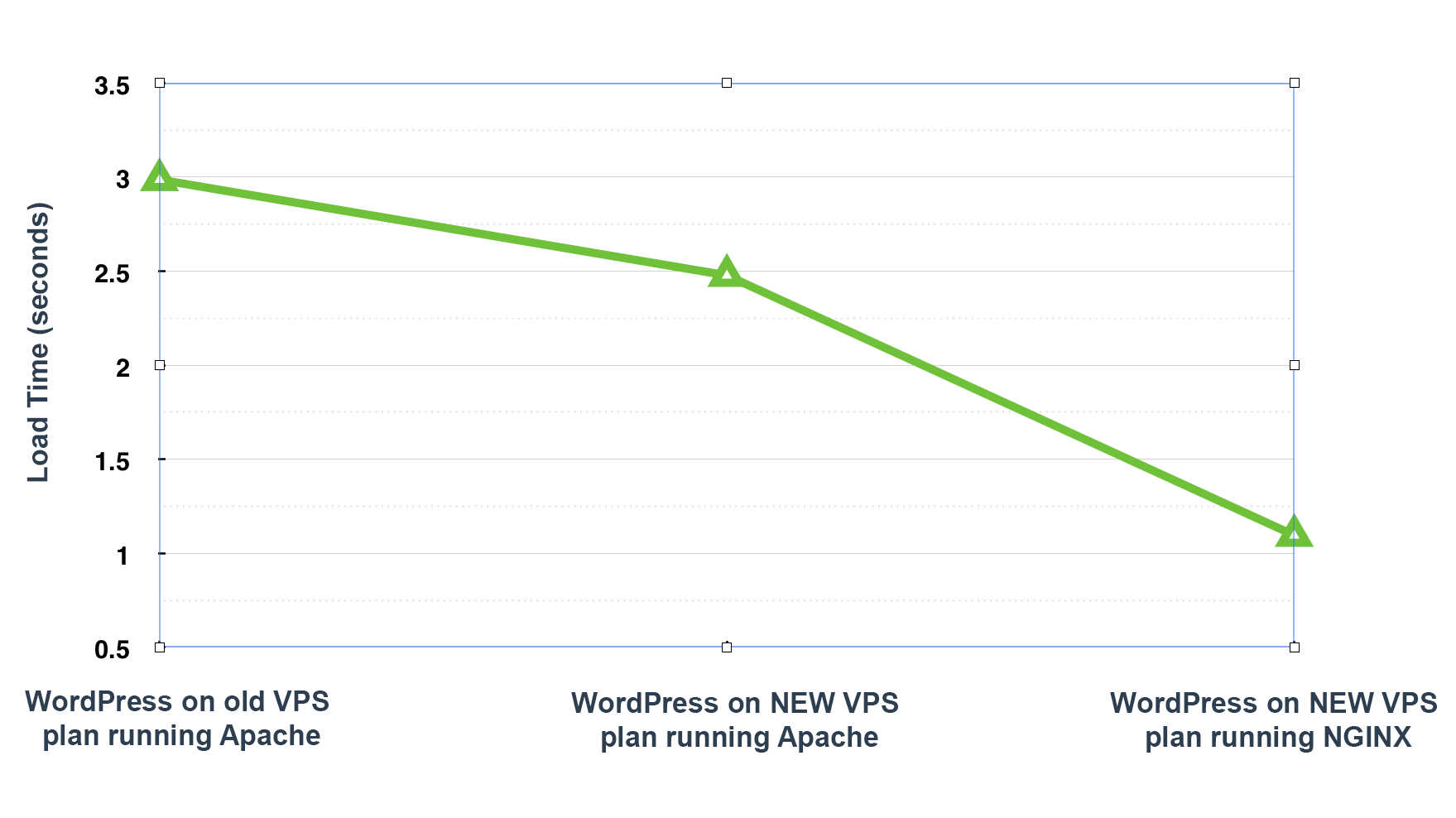 Significantly better value, improved reliability, loads of additional cutting-edge features, noticeably faster load times — ESPECIALLY USING NGINX — (although if you’re wanting to simply run WordPress as quickly as possible with minimum fuss you’d perhaps be a better off considering a specialist service like DreamHost’s DreamPress, Media Temple’s Premium WordPress Hosting or WPEngine) – that said of course, it’s worth remembering that the above tests are on default WordPress installs – i.e. with no caching plugins and no CDN etc, which would obviously speed things up somewhat) and the option of running Nginx for lightning-fast speeds (as an alternative to good ol’ Apache) – what’s not to like***?! Good job DreamHost!

*since I currently run all my DreamHost-powered sites on their VPS plans.

***it’s been pointed out to me since posting this article that, at the time of writing, the Nginx option on DreamHost limits you to using only PHP v5.2 – which is an issue that could cause compatibility problems with some plugins and could really be a lot better!

(note: above test sites are all running the default Twenty Fourteen WordPress theme)