WinningWP content is free to all. If you make a purchase through referral links on our site, we earn a commission (learn more).
Tags – Alexa Rank

Alexa Rank – What Is It? And Is It Important?

People love sticking numbers on things — usually when comparing and contrasting them with things that are similar — and websites are no exception. After all, what webmaster wouldn’t want to compare and contrast his or her website with that of a competitor?

One of the most well-known metrics aimed at allowing people to do exactly this is the infamous Alexa Rank.

Well, many people don’t trust it as an accurate indicator of what it’s supposed to be a measure of.

Right, enough of an intro, let’s get stuck in.

Founded in 1996, Alexa is a California-based subsidiary company of Amazon.com (acquired by Amazon in 1999) that specializes in providing commercial web traffic data gathered via various toolbars and web browser extensions.

Some of Alexa’s most notable previous activities include providing a database that served as the basis for the creation of the Wayback Machine and the creation of various search facilities (now largely discontinued).

The feature it’s probably best known for is, of course, ‘Alexa Rank’ — a metric that ranks websites in order of popularity, or, rather, how well they’ve been doing over the previous three months.

Note: For more on the history of Alexa Rank, check out this earlier post of ours.

How Is an Alexa Rank Measured? 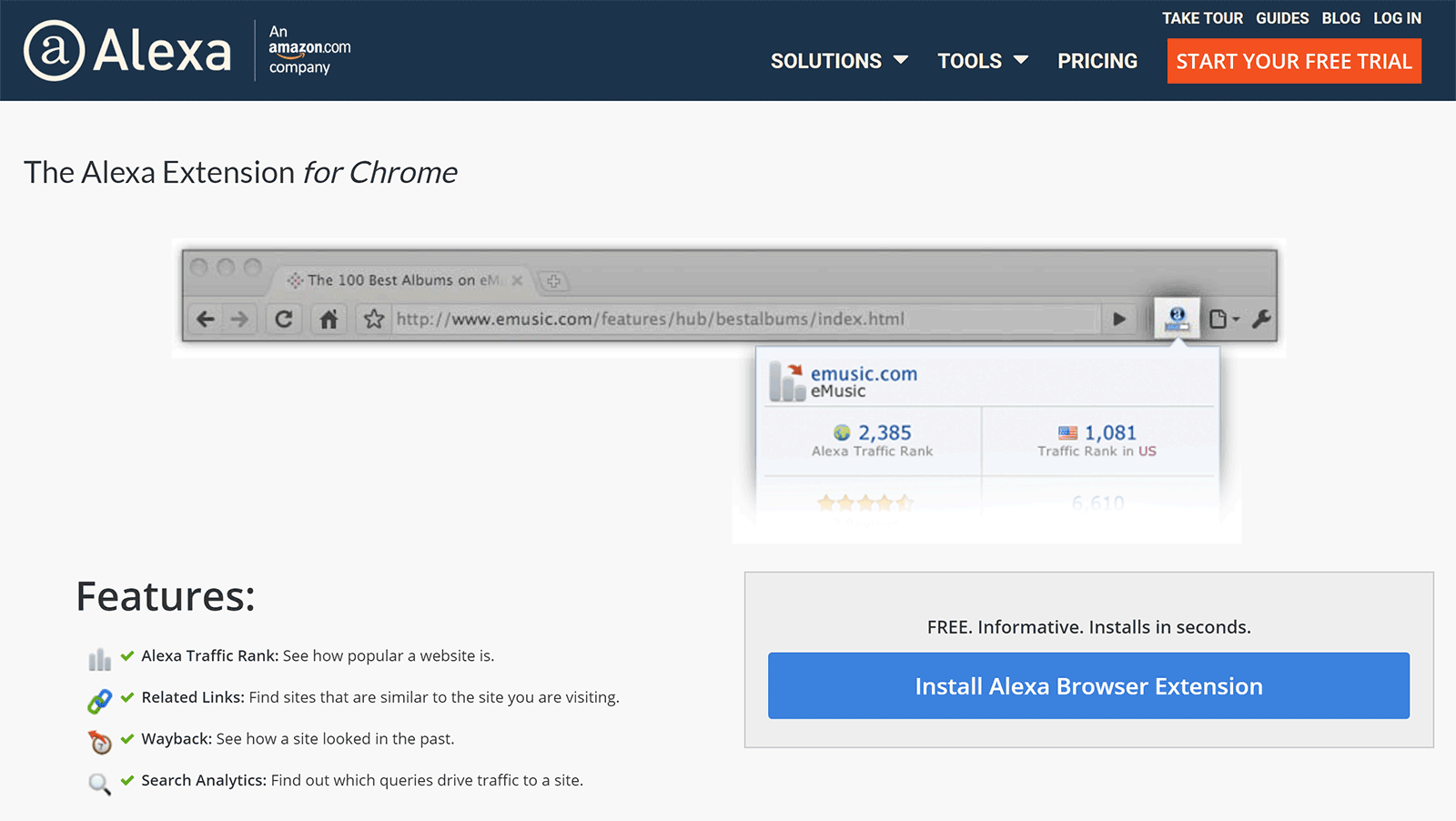 The data is collected from a subset of internet users using one of 25,000 browser extensions for either Google Chrome, Firefox and/or Internet Explorer. An algorithm then ‘corrects’ for various potential biases and attempts to compensate for visitors who may not be in Alexa’s measurement panel (a factor it hasn’t always tried to accommodate for) and normalizes the data based on the geographical location of visitors.

Alexa refers to the data retrieved from browsers as its ‘Global Traffic Panel‘, pulling data from millions of internet users in this way. However, Alexa also sources data directly from third parties to improve the accuracy of the tracking.

It should also be noted that Alexa doesn’t provide separate rankings for sub-domains and sub-pages. It does make an exception to this rule for large blog networks, such as WordPress.com.

How Can I View a Website’s Alexa Rank?

At least this part is straightforward: Simply go to the official Alexa website, type in your full domain name and hit return!

Alexa refers to this report as ‘Website Traffic Analysis’.

The report displays interesting metrics such as bounce rate, daily pageviews per visitor, daily time on site and the percentage of visits from search. It also highlights various demographics, a list of sites that link and even page speed/load times (all of which should probably be taken with a pinch of salt).

You can also view the Alexa Rank of any website you’re visiting by installing the Alexa Toolbar on your browser.

In addition to the global Alexa Rank, it also highlights the USA Alexa Rank for the website, the number of websites linking in, the time it takes to load the page, similar websites, and links to the full report and the Wayback Machine archive for the website.

What Does the Alexa Rank Mean?

The general consensus seems to be a reluctant admittance by most (certainly not all) that there does indeed appear to be a rough correlation (seemingly with a LOT of outlying data points), between a site’s Alexa Rank and traffic for well-established websites that receive over and above a certain level of traffic. 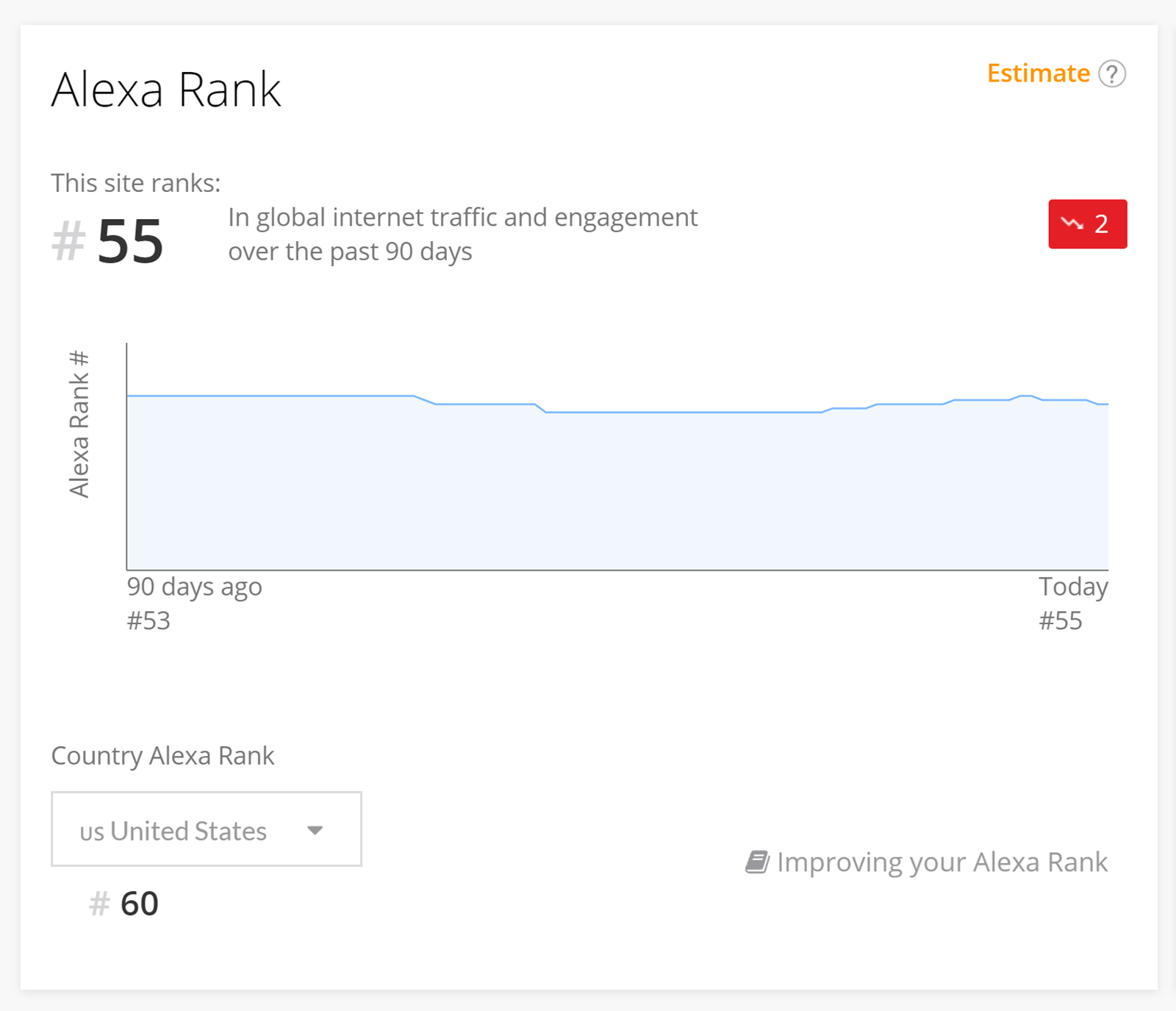 In the article ‘How are Alexa’s traffic rankings determined?,’ Alexa notes that it doesn’t receive enough data from its sources to make rankings beyond 100,000 statistically meaningful. It also notes that the closer a site gets to #1, the more reliable its rank.

Any website that has a rank higher than this 100,000 waypoint can almost be completely ignored, as the figure isn’t reliable.

It seems that a lot of people who have access to reliable web analytics data, such as Google Analytics of course), often report seeing web-traffic trends and statistics that appear to be completely out of line with the corresponding Alexa Rank for each site.

A quick Google search for ‘Is Alexa Rank Accurate?’ will indicate that many website owners do not trust Alexa’s ranking system.

Although, in all fairness, many of these reports reference websites with high Alexa Ranks that are in excess of the 100,000 mark.

At the heart of the problem, though, there seems to be two issues:

For most site owners, knowing how their website is doing against the competition is important. However, when assessing your own website my advice would be to simply stick with the data from Google Analytics as it will be more reliable.

Do not attribute any significant meaning to your site’s Alexa Rank.

When looking at competing sites, however, by all means take a quick peek at their Alexa Rank for a very rough idea of how popular their website is relative to yours. In the full Website Traffic Analysis report, Alexa shows you how your audience overlaps with competitors by examining the keywords in both websites and looking at audience demographics. This will help you to see how closely related your visitors are.

Please remember that Alexa Rank is just a rough guide on how websites rank in relation to each other. Therefore, it’s possible for your Alexa Rank to decrease, despite your website gaining thousands of new daily visitors. Additionally, if your website’s Alexa Rank is above the 100,000 mark, it’s probably best not to go attributing any significant meaning to comparing Alexa Ranks at all.

I personally hope that Alexa continues to work towards really getting this particular metric up to scratch because it sure would be nice to stick a number on each and every website that would allow us to compare and contrast them all with a decent level of accuracy.

Over the past ten years, Alexa has done a lot of work on increasing the accuracy of its ranking system by sourcing data from millions of additional users, but it would appear it’s still got a long way to go to regain the industry’s faith.

What do you think? Have you noticed Alexa Ranks becoming more accurate as it decreases? On a scale of one to ten, how much faith do you generally place in the accuracy of a site’s Alexa Rank?