WinningWP content is free to all. If you make a purchase through referral links on our site, we earn a commission (learn more).
Tags – Alexa Rank

Is there a correlation between Alexa Rank and traffic? – An experiment using real numbers. . .

Last week I covered Alexa Ranks – going into what they are, why they’ve got a bad rep’ and why you probably shouldn’t attribute too much meaning to them. However, ever since writing last week’s article I’ve been trying to think of a way to try and bring some actual/real numbers into the mix: to try and establish once and for all whether or not there really is a significant correlation between Alexa Rank and traffic (specifically ‘pageviews’). Granted Alexa doesn’t actually state that there necessarily should be a correlation, since according to the official definition, a site’s Alexa Rank is simply a measure of ‘how a website is doing relative to all other sites…‘. However, I think it’s a likely a pretty safe bet to assume that most people tend to think there probably should be: after all, if the amount of traffic/pageviews a website receives isn’t a decisive factor in determining ‘how a website is doing’, what is?

The thing is, of course, trying to find enough data to do a meaningful plot of Alexa Rank vs traffic is extremely difficult – since exactly how much traffic a particular website receives is usually something most webmaster’s tend to keep pretty close to their chest. Unless that said, a websites are trying to attract advertisers… hmmm… So, with this in mind, how about, for example, using the data published on a website like BuySellAds? …Let’s have a go…

BuySellAds is ‘one of the largest advertising marketplaces on the Web, selling well over 6 billion ad impressions each month…’ What’s more, it’s also a service I’ve personally used on numerous occasions and so know quite well. For this particular experiment, I’ve decided to include website’s from only their ‘Web Design & Development’ category: partly because I figured these are the kinds of sites that will be of most interest to this blog’s readership and partly because I’m thinking that using sites from only one category should help minimize some of the biases (mentioned in our previous post) brought about by the way Alexa collect their data. What’s more, I’ve only used the first one hundred or so ‘featured’ sites in this category (partly because I imagine this should be enough to get a meaningful insight but mainly because I’ve only got a limited tolerance for repetitive tasks, such as repeatedly looking up Alexa Ranks).

Well… yes, it is a bit, since all of these sites obviously have certain things in common: they all sell advertising space and are all somehow related to tech or web-design. So although the data points are presumably pretty accurate (the Alexa Ranks are taken from the official Alexa site and I would personally trust the accuracy of the BuySellAds data to within a few thousand or so – having used the service a number of times and found very few discrepancies), I can’t really say for sure whether or not the results of this experiment can be used to reliably infer any relationship between Alexa Ranks and traffic/pageviews for sites of a more general nature…

Alexa claims to have data for about 30 million websites, and I’ve only plotted about a hundred here (ranging between Alexa Ranks of approximately 2000 to 90,000) – so it should go without saying then (so why say it? lol) that a) plotting more data points may reveal a better/worse correlation and b) either side of these data points is, of course, completely outside the boundaries of this mini experiment.

Graph one – all data: 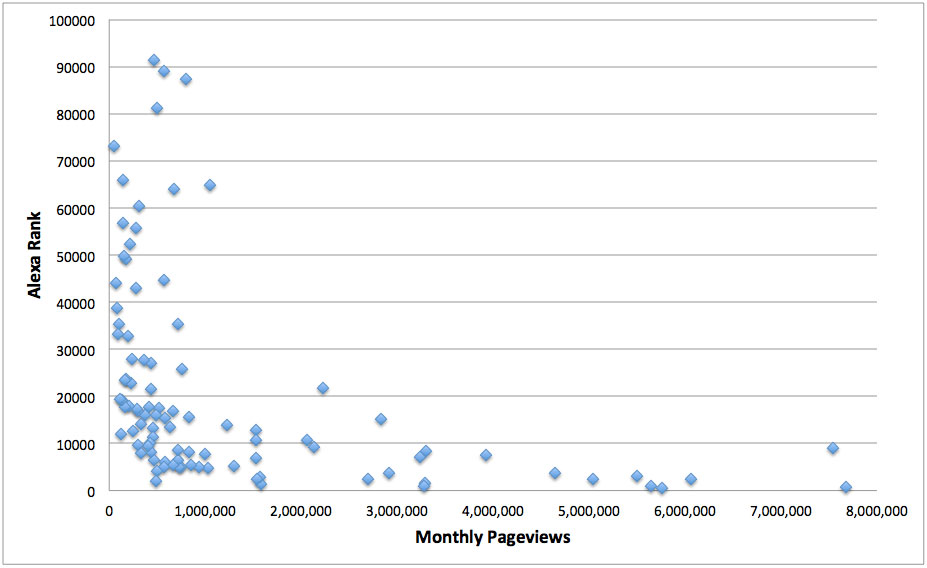 Graph two – focusing in on the bottom left of the above graph: 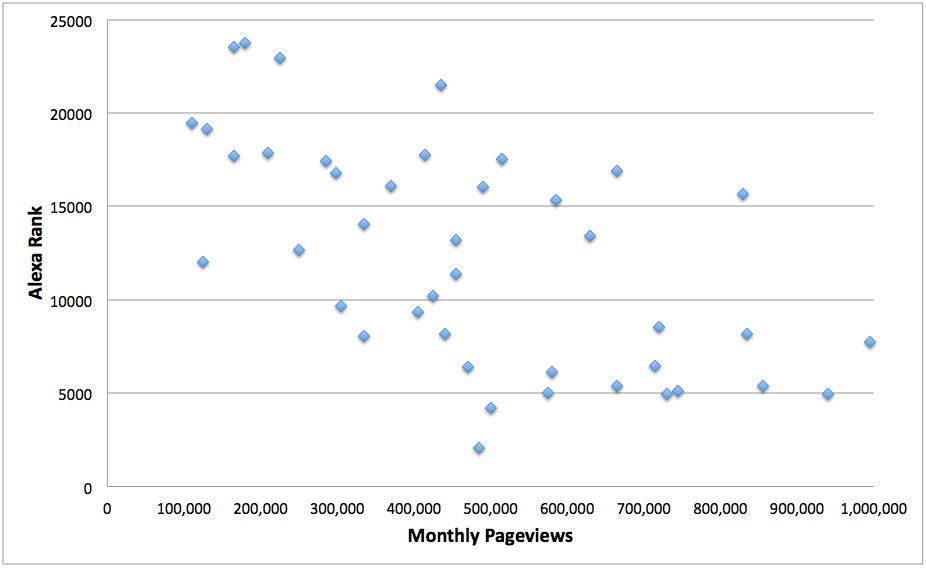 For the given set of data there does appear to be a very vague correlation (note the complete lack of data points in the upper right-hand quadrant of the ‘all data’ graph), however, I wouldn’t want to be the one to have to try and fit a meaningful curve to it!

What do you think? Are these fair results? Any ideas for a followup/better experiment?