In stark contrast to version 3.7 (released just 49 days ago), WordPress 3.8 is jam-packed with readily noticeable new features! Named after Charles Parker, a highly influential jazz soloist and a leading figure in the development of bebop, 3.8 is primarily all about improving and updating user interfaces (read visuals): transforming the WordPress admin/dashboard area into the sleekest looking content-management-system-backend since, well, the previous one – with new typography, a modern aesthetic that looks great on any device and the chance to customize the whole look of the thing with a choice of eight stunning color schemes; new, prettier and easier-to-use theme- and widget-management areas and a brand new (and rather impressive) magazine-centric default theme named Twenty Fourteen: let’s delve in to what’s new in WordPress version 3.8:

The most beautiful WordPress backend yet! 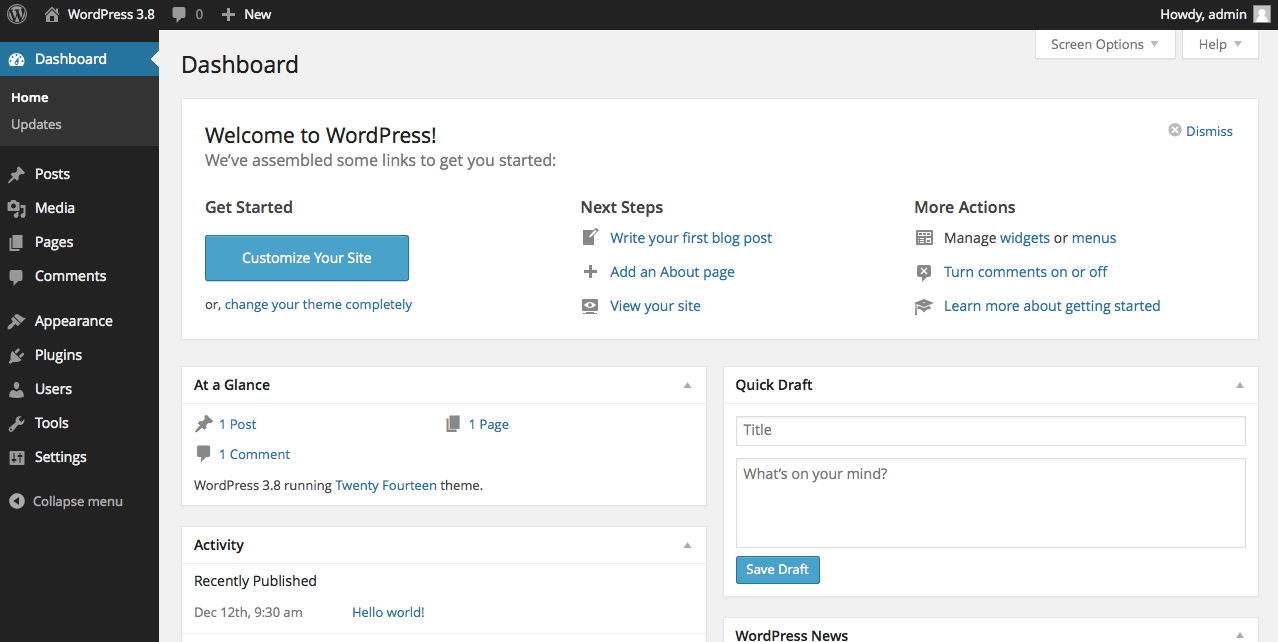 But that’s not all, oh no, because 3.8 also makes the WordPress backend a whole heap more responsive – with various different admin designs that automatically present the optimum layout for the size of the screen you’re using; furthermore, there’s also the addition of a brand new set of vector-based icons that scale to the size of your device (instead of the previous pixel-based icons that didn’t) – resulting in significantly faster page-loading times).

A really nice (and somewhat playful) feature of WordPress 3.8 that’s already been covered to death (so let’s cover it here too! lol), are the new admin color schemes: personally I doubt I’ll ever use any of them (because I’m a square), but you can bet you’re bottom dollar there’s boat loads of more interesting people than me out there that will! Note: if you’ve just updated to WordPress 3.8 and can’t work out where these new color scheme options reside: you’ll find them on the ‘Your Profile’ page, under the ‘Users’ menu.

Whilst the new theme management area isn’t a section of your site you’ll be visiting all that often, when when you DO visit it, you’ll be pleased with the new changes, which include larger thumbnails that can be clicked on for a very nice split screen popup showing an even bigger theme-screenshot to the left and a beautifully formatted theme description to the right (furthermore, you can then use your keyboard’s navigation areas to flip through previews of all the other themes you have installed).

If your site has a heap of different widget areas (like more than about 5), you probably dread having to change and configure your widgets: after a while the very thought of trying to drag one down to the widget area in which you want it whilst desperately trying to keep it selected and scroll the page down at the same time can leave you wondering why you ever got involved with WordPress in the first place (joke)! Luckily, with 3.8, things are a whole lot easier (not perfect, but much much better): with 3.8 you not only have automatically stacking (depending on the size of your screen) multiple-column widget areas, you also have the option of clicking on a widget you want to use and selecting which widget area you want to use it in – thereby placing it in the required widget area as if by magic! Sweet!

Unlike all default WordPress themes that have gone before it, Twenty Fourteen is a ‘magazine theme’, which means it lets you display your content in more of a magazine-type fashion than does a regular old blogging theme… allowing you to choose from various new options under the ‘Customize’ tab (listed in the ‘Appearance’ menu), such as whether you want a grid-layout or a slider on the homepage, etc (read more on this).

Can’t wait for more updates? Unfortunately (or perhaps ‘fortunately’ – if you’re not really interested in new features and don’t like to be bothered by new releases), according to the official WordPress Roadmap, you’ll have to wait until some times in early 2014 for the next major release (version 3.9) and mid 2014 for the one after that (version 4.0).

Note: for a complete list of what’s new in WordPress 3.8, check out the official version 3.8 codex – and, as usual: be sure to back things up before updating!