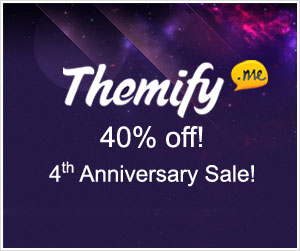 If you don’t already know (and you probably already do), Themify (founded by Nick La and Darcy Clarke) is one of the most popular, highly-respected WordPress theme providers around! Something you may not be aware of though, is that this week Themify are celebrating their 4th year anniversary – by offering a pretty darn appealing 40% discount on any purchase!

Something else you may not yet be aware of: on top of continuing to offer a range of extremely attractive themes (such as Elemin, Pinboard, Magazine, Parallax, Flatshop, Event, Fullpane and Music – to name but eight of over forty), Themify have also – as of late – been expanding into new markets: by offering a couple of handy new WordPress plugins, such as Announcement Bar and Conditional Menus (free) – both of which are well worth checking out!

To take advantage of this superb anniversary offer simply use the following discount code: ‘FANTASTIC4‘