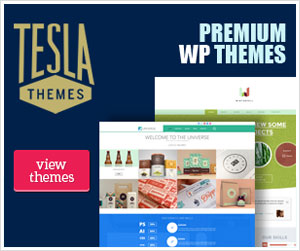 Since launching back in early 2013, TeslaThemes have gone from strength to strength, creating a handsome 24 premium WordPress themes (such as ‘Revoke‘, ‘Electra‘ and ‘Zoomy‘) and amassing a more-than-healthy 10,000 customers (backed up by over 800 Twitter followers and in excess of 2600 Facebook Likes) in less than twelve months! What’s more, in celebration of their official one year anniversary, until the 30th of this month they’re offering a pretty impressive deal: all of their themes and subscription plans at a hugely reduced price of just $14.99!

Oh, and for anybody who fancies entering a special anniversary giveaway, they’re also offering the chance to win an iPad mini and a heap of bundled goodies*!

Deal expired? No worries: there’s always our regular 20% off any theme coupon!