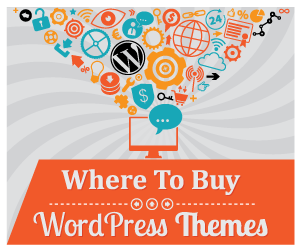 As a blogger, I spend a lot of time using the WordPress text editor. As such, any improvements to the way I create posts could potentially have a big impact on my work — so you can imagine then, how intrigued I was to learn of MotoPress: a drag-and-drop content editor plugin specifically designed to replace the default WordPress text editor…

Now, I’ll be honest: I’ve never really had any issues with the default WordPress text editor, and so before getting my hands on MotoPress I was relatively unsure what to expect — after all: “if it ain’t broke, don’t fix it,” right?!

However, I wanted to test some of the core features (of which there are quite a lot) thoroughly — and with an open mind — in order to provide an unbiased review of the plugin. Here’s how I got on:

Once launched (note: it takes a few seconds to load), the interface looks completely different. Gone is the familiar WordPress dashboard on the left, as are the Publish, Categories, and Tags meta boxes from the right-hand side.

Instead, MotoPress displays its own buttons on the left, with a drag and drop editor now visible in the centre (you have the option of a light or dark skin). The only thing you’ll recognize is the WordPress navigational menu at the top of the screen — if you want to revert back to the default WordPress dashboard, simply click the Close button in the top corner. 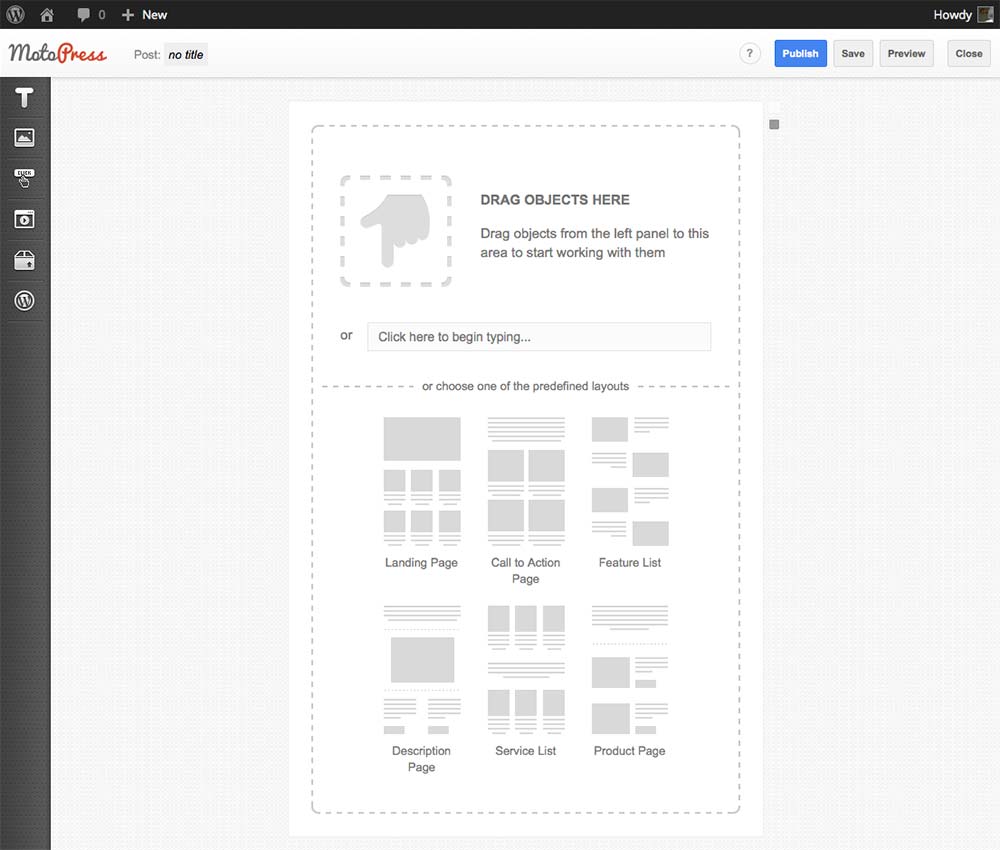 Note: For anybody unsure of the new layout, the developers have thoughtfully included a Help and Tutorials button (look for the question mark within a circle directly next to the large blue ‘publish’ button) that opens up a number of useful videos to help you get started. There are nine videos in total, which cover everything you need to know about the new editing interface.

Before I tested out the plugin’s true capabilities, I decided to see how it performed when writing a typical, content-focused blog post — the way I would personally spend the majority of my time using it.

The MotoPress editor can be activated on posts, pages, and any custom post types — options that can be controlled by selecting MotoPress > MotoPress Options. From the same options page, you can also choose which user groups you’d like to have access to it (default groups, as well as custom user groups).

If you’re particularly used to the default WordPress text editor (as I am), it will likely take you a good few minutes to get used to it all. I was advised to either drag an object into the drag and drop editor, or simply start typing. Clicking the Start Typing button automatically added a Paragraph object to the WYSIWYG editor, and I was away. 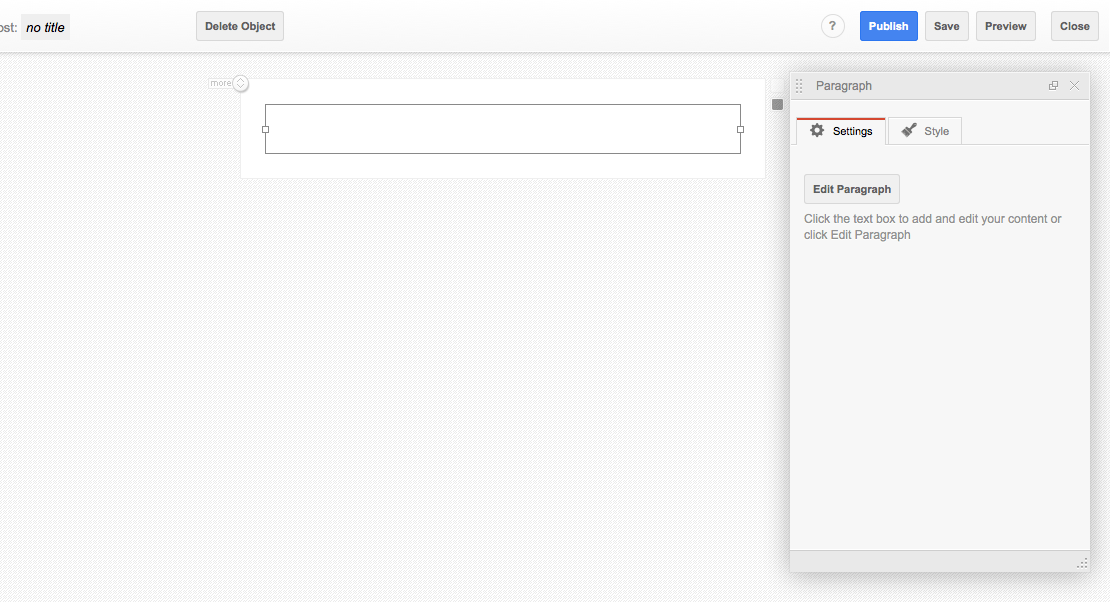 I then decided to try out some of the various new formatting options. MotoPress displays a handy floating formatting-box above your text that allows you to add bold, italics, or underline formatting, as well as giving you the options to play with font sizes and add links. From this box you can also select your font style — in other words, to switch between regular writing and adding h1, h2, or h3 header tags.

There is also a floating sidebar box, from which you can format the space around the module using a number of pre-set margins. To adjust the size of the Paragraph module, I was able to simply pull it about so that it took up more or less space on the screen.

Once you’ve saved your work, MotoPress will then insert its own shortcode into your post/page, which you’ll then be able to see (and even add more to) in the regular old WordPress text editor — very handy (although should you ever choose to uninstall MotoPress, you’ll have to remember that this shortcode will no longer be functional of course)!

Writing a blog post was incredibly easy, and I definitely felt that I had more than the usual amount of control when it came to formatting my post.

With a simple blog post written, I decided to delve deeper into its capabilities…! 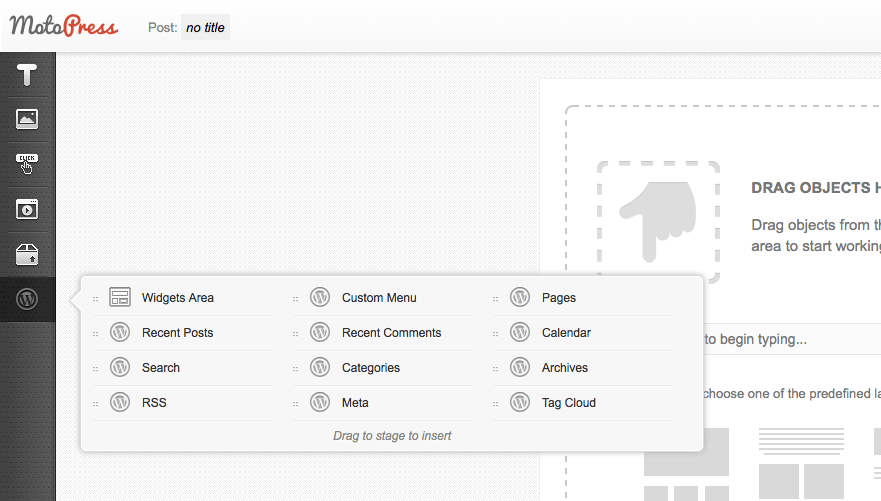 There are over 20 ‘modules’ for you to add to the text editor, listed under six headings:

That’s an impressive range of supported modules, but the best aspect of using MotoPress is the way you can drag and drop a module into the WYSIWYG editor to give you complete control over the layout of your page. You can literally just pull your content about until you get it all exactly where you want it!

Adding multiple modules to the editor isn’t the quickest task however — every time you add a new one, or re-size/re-position an existing one, the MotoPress editor takes a good few seconds load it all on the screen. However, this is, of course, a very small price to pay considering how easily you can manipulate the formatting and layout of your content.

Adding an image was also incredibly simple: dragging an Image module into place brought up the media library for you to select the image to display. You can also easily re-size the image by dragging at its corners.

I also tested out the button-creating function, and found myself impressed — MotoPress makes inserting a button into your content super-easy. You can add a target URL, select whether the link opens in a new window, and are also given various styling options. The buttons look good too — with everything working just as well as it does in many of the specific button-generating plugins out there.

You could also use MotoPress to insert social sharing or social follow buttons. MotoPress supports four social networks: Facebook, Twitter, Google+, and Pinterest. The icons are small but stylish. Furthermore, you can also choose to use either circle, square or round icons.

My personal favorite module to work with was probably the Slider — I’ve added image carousels in the past, and they can be a real nuisance to configure. With MotoPress however, I found everything incredibly quick and intuitive. You simply drag a slider into place, pick the images you wish to insert from your media library, and you’re good to go! You can re-size the slider the same way you re-sized images — making it incredibly quick and easy to get it to fit it just about anywhere on your page. Finally, you can choose between fade and slide transitions, the time between transitions, and even the length of transitions. Again, I found the slide functionality to be up there with many specific premium slider plugins.

Overall, I was a huge fan of the way the WYSIWYG editor worked. I found it both intuitive and fun to use! You can produce an unlimited number of combinations of modules, and re-sizing them and moving them around is incredibly easy — it took me no more than a few minutes to get the hang of it.

I enjoyed using the MotoPress editor, and was mightily impressed with the number of functions it supported — you could actually replace quite a lot of existing plugins that you may have previously required for various tasks as MotoPress allows you to integrate a large range of different functionality, such as high-quality buttons, carousels, social icons, maps and more!

From a blogger’s perspective, I would consider some of the modules a “luxury” — other than adding and positioning images, I personally wouldn’t likely use many of the other modules all that often. That said however, if you’re looking to do more with WordPress, such as creating complex page layouts (especially for landing pages), for example, then MotoPress may well prove to be just the thing!

And finally, we’ve teamed up with MotoPress to offer WinningWP readers a handy 15% discount Coupon Code!

If you haven’t already, check it out over on the official website.

Shaun Quarton is a freelance blogger from the UK, with a passion for online entrepreneurship, content marketing, and all things WordPress.