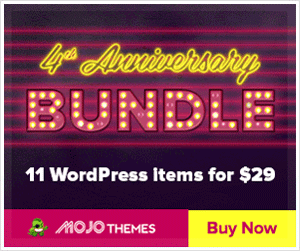 MOJO Themes, a huge open marketplace for premium themes (not just for WordPress but also for Joomla, Magento and various other content management systems), is about to turn four – and to celebrate the occasion, they’ve put together an incredible deal: a WordPress-theme bundle consisting of eleven top-selling premium themes (which would normally equate to a value of $549) for just $29! What’s more, they’ve also gone a step further by partnering with HostGator to offer every customer who purchases the bundle the opportunity to get set up with HostGator web hosting for one cent!