How much difference does a CDN make to WordPress load speeds? – a real-life example!

Precisely how much faster a CDN (Content Delivery Network) will make your own particular website will depend on a number of factors, such as your site’s web hosting setup/configuration, how much content your site displays, the complexity of your theme, which plugins you use and, well, actually a whole host of other things… in short, it’s impossible to say how much of a difference a CDN will make to the load speeds of your site without actually giving one a whirl! We can, however, say exactly how much difference a CDN (we use MaxCDN) makes to THIS website – something that will hopefully give anybody who’s still wondering if a CDN is something worth bothering with a proper insight (with real numbers) into the matter.

So how are we gonna do this?

Well, all we really need to do is compare the initial load speeds of this website in its normal configuration (i.e. with MaxCDN enabled) with the load times of the site with MaxCDN disabled – simple! Let’s get cracking…

…but wait, before we can get going with this high-school-science-project-like experiment, let’s take a quick look at a few specifics of the site we’re about to test (partly because we’re liable to change a few of them at some point in the not-too-distant future but mainly so that anybody who’s interested can compare them with those of their own website):

We’ll use GTMetrix to measure the load times of our homepage (since this is the page that gets by far the most pageviews per month and the page that’s often the most viewed by new visitors) in ten sets (measured over the course of a single day) from five different locations (Vancouver, Dallas, Hong Kong, London, Mumbai, Sydney and Sao Paulo) and then take an average of each of the ten sets to get our final results. Once with MaxCDN enabled and then again with MaxCDN disabled. Simple!

Firstly, let’s take a look at WinningWP with MaxCDN enabled:

Just out of interest, how much worse would the load times be without W3 Total Cache? – Let’s do the whole thing again but this time without BOTH MaxCDN AND W3 Total Cache (i.e. with MaxCDN disabled and W3 Total Cache deactivated)…

First things first: holy cow WinningWP is slow! Even with MaxCDN fully enabled the initial load time for the homepage of this site is rarely under 4 seconds – hmmmm… time to swap to a faster hosting service perhaps? Anyway… back to the business in hand:

Perhaps the clearest way to sum up the results of this miniature-study is with a good ol’ graph: 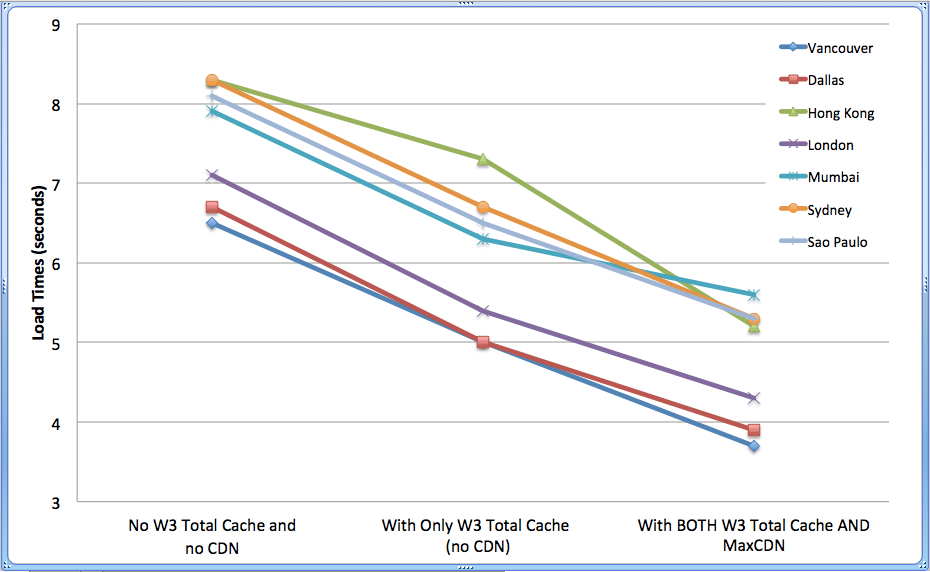 …from which it’s not hard to see that the application of W3 Total Cache alone (i.e. without MaxCDN) reduces the initial load times of this website (according to GTMetrix) by somewhere in the region of 1.5 seconds (from all testing locations)… and that the additional application of MaxCDN reduces them by somewhere in the region of a FURTHER 1.5 seconds – wow!

Looking at the data it’s pretty clear that the application of both W3 Total Cache and MaxCDN makes an absolutely huge difference to the initial load speeds of this site – a difference that’s even more pronounced (since a user’s perception of load speeds isn’t directly proportional to actual load speeds) outside of Europe and the US!

Was this helpful? I sure hope so because it took almost a whole day to write! If nothing else, at least it shows that WinningWP could do with being quite a bit faster… apologies: we’ll endeavor to try and speed things up a bit in the coming few weeks!