One of the most common mistakes WordPress-newbies make is using a word processor (like Microsoft Word, Pages, and WordPerfect) to edit server-side source-code files (such as .html, .css and .php files, etc). The problem here is that word processors need to embed a lot of extra data in the file (behind the scenes) in order to define various things like font styles, etc — data that is almost always both specific to the word processor being used AND completely incomprehensible to the kind of server-side systems required to run websites (be them powered by WordPress or otherwise). The solution, however, is extremely simple: when creating and/or editing server-side files (such as those used with WordPress) be sure to only ever use a purpose-built Text Editor. Let’s take a look at a few of the best options created specifically for the task: both free and premium — for both Macs and Windows:

Looking for more than just a basic text editor and got the cash to spare? Then go for one of these (note: scroll down for some excellent free alternatives)…

Publicly released in 2008, Sublime Text is now one of the most popular and highly-regarded text editors available! One of the most notable things that sets this particular software apart is that it works across all three major platforms (Windows, OSX, and Linux) — on top of which it also supports a huge range of languages, has extensive customizability via JSON settings files (including project-specific and platform-specific settings), and offers a huge range of features including column selection and multi-select editing, auto-completion, snippets, in-editor code building and a particularly handy navigation system that lets users open files with only a few keystrokes and instantly jump to specific symbols, lines or words. 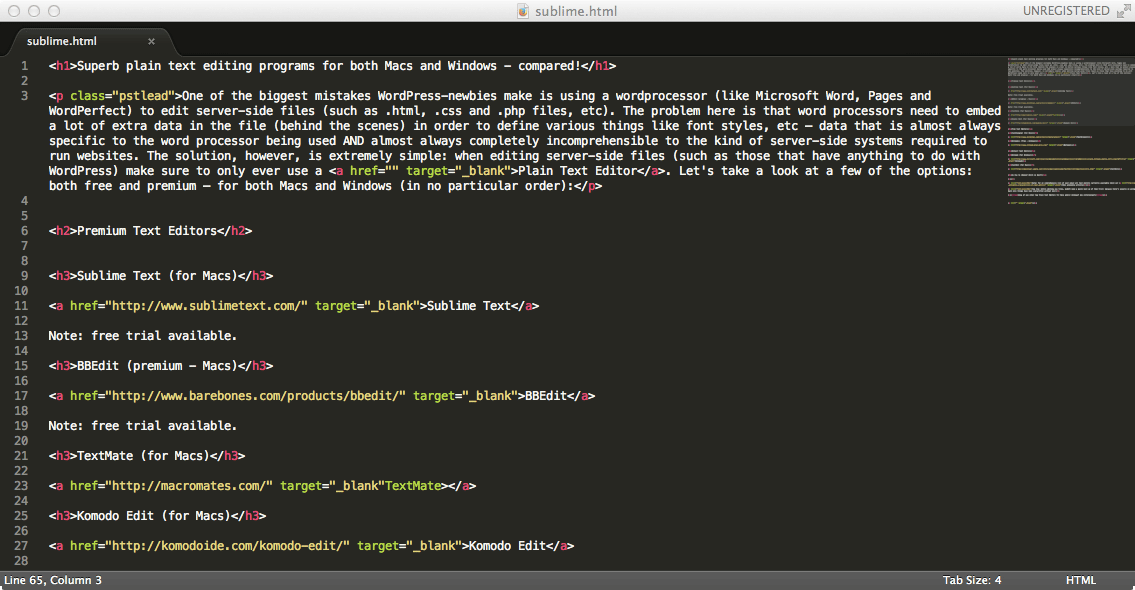 Designed specifically for software developers and web designers (and with over 20 years of history), BBEdit contains powerful multi-file text searching capabilities including strong support for Perl-compatible regular expressions and GREP. It includes FTP and SFTP tools, integrates with various code management systems, supports version control, shows differences between file versions and allows for the merging of changes. Also noteworthy is the fact that the same company that makes BBEdit, also offer an entirely free version named ‘TextWrangler’ (see below) — which may very well suffice if all you’re looking for is a top-notch text editor to edit (or even create) a few source files from time to time! 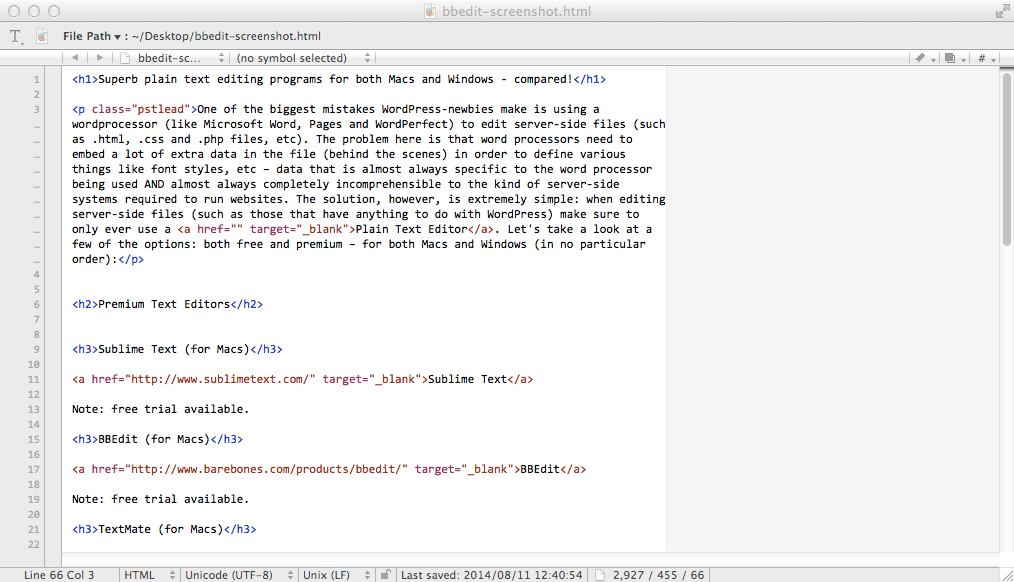 Billed as ‘the missing editor’ and awarded the Apple Design Award for Best Developer Tool at Apple’s Worldwide Developers Conference in 2006, TextMate is a much-loved text editor with a number of notable features, including declarative customizations, tabs for open documents, recordable macros, folding sections, snippets, shell integration, and an extensible bundle system. In short: it’s both a joy to use and highly-capable — what’s more, it’s also particularly well-documented — heck, it even has its own book! If you’re a hardcore coder developing on the Mac, be sure to check this one out! 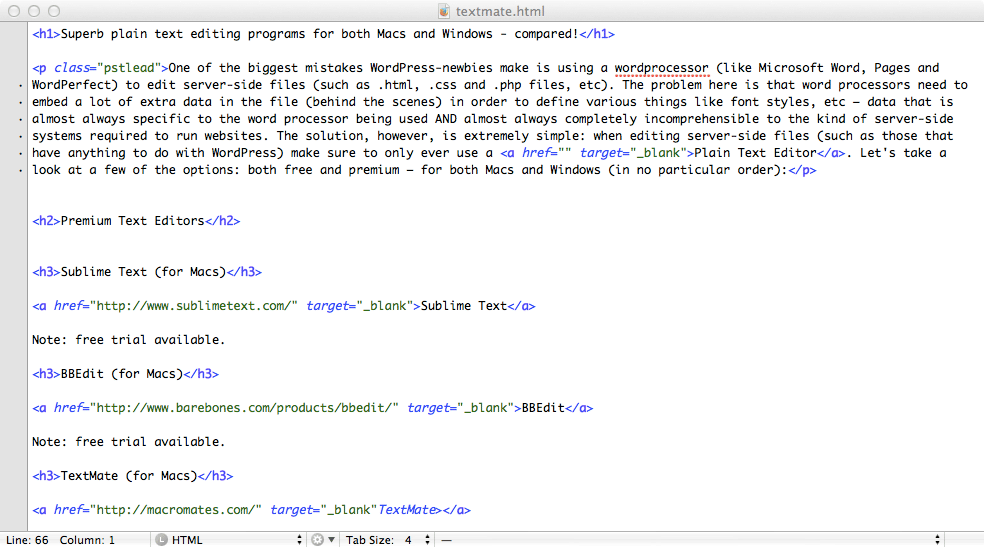 Although the above premium text editors are all very very nice, if you’re only a basic/beginner developer then you may well find one of these free options will more than suffice…

Atom (for Windows, Macs and Linux)

Released on June 25th 2015, Atom is the newest text editor on this list — and a choice that professional coders everywhere will likely want to seriously consider! Written in CoffeeScript and Less, Atom is a completely free and open-source text editor with support for plugins written in Node.js — referred to by its creators as “A hackable text editor for the 21st Century”.

Atom is a text editor that’s modern and extremely user-friendly — a tool you can customize to do just about anything with. It features cross-platform editing, a built-in package manager, smart auto-completion, a file system browser, four UI and eight built-in syntax themes, multiple panes and — of course: handy find and replace features. 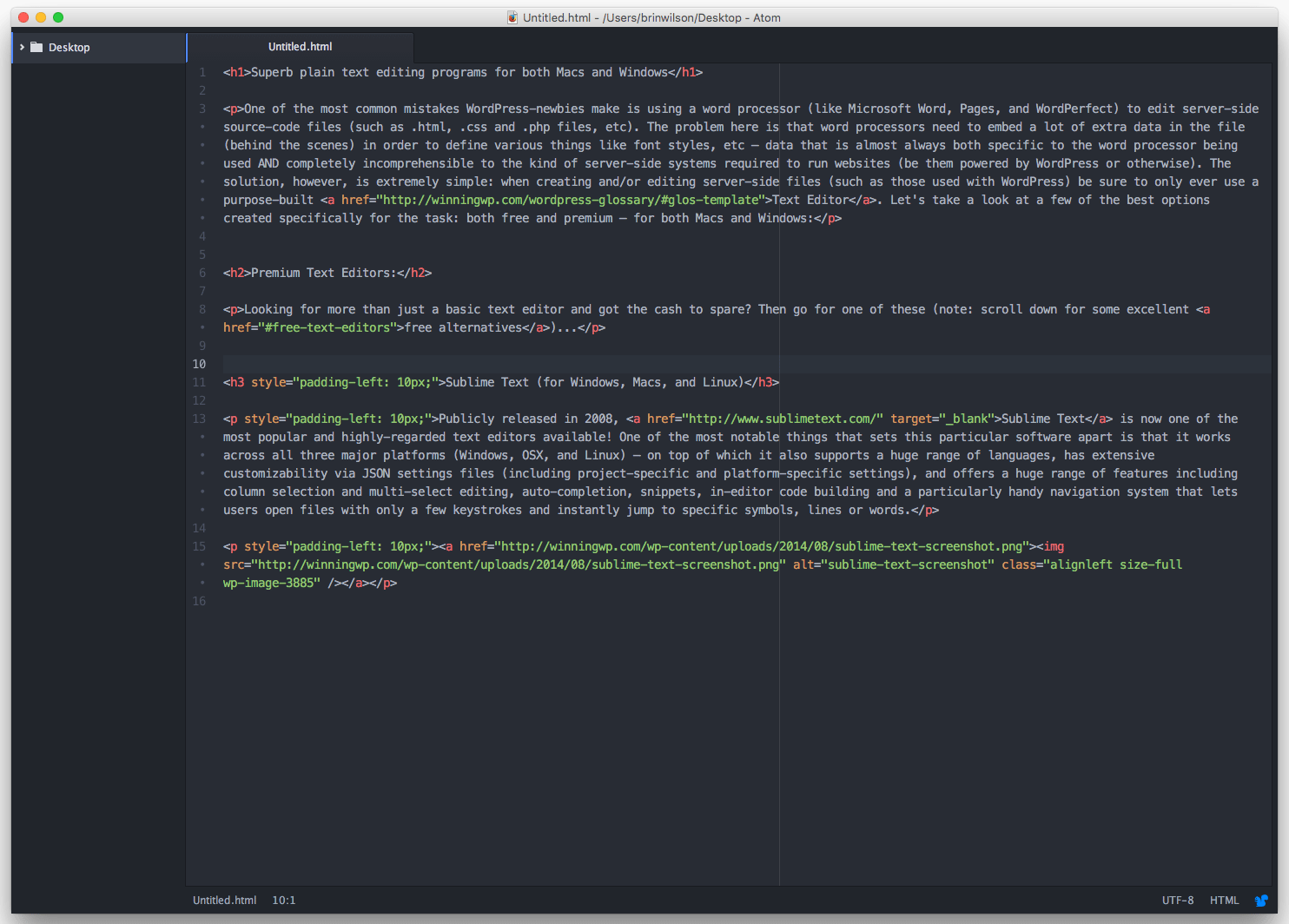 The free alternative to BBEdit (see above), TextWrangler differs to its premium counterpart in a number of ways — all of which are detailed in a nice table on the official Bare Bones website here (notably lacking various HTML markup tools, text completion and file organization features). Whenever I find myself having to recommend an entirely free text editor for the Mac (or when I need to use one on someone else’s computer etc), I almost invariably go straight for this one — mainly because it’s just so darn simple to use! 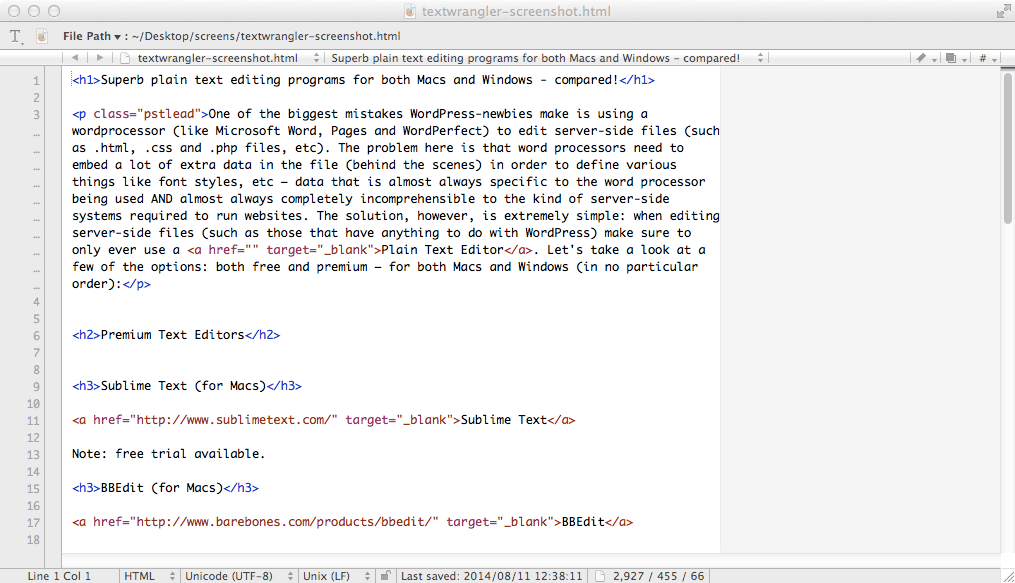 The free and Open-Source counterpart of Komodo IDE, Komodo Edit allows user customization through plug-ins and macros, and boasts a range of different features, including auto complete, multiple selections, smart snippets (view a complete list). The downside of all this free power though is because of its IDE roots, it perhaps isn’t quite as user-friendly as some of its simpler rivals. By all means give it a go (especially if you’re more of an advanced user), but if all you’re wanting to do is edit a few individual source files, then this one might just be a bit too daunting to start out with! 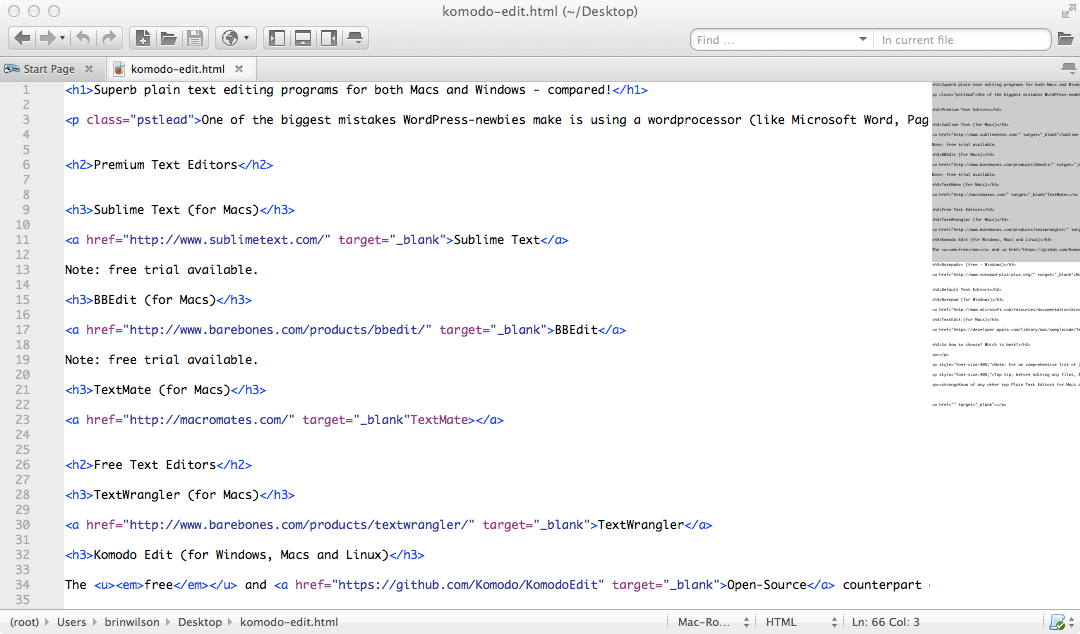 Regarded by many as the best free text editor available for Windows (and with over 28 million downloads to date), Notepad++ is a robust, powerful and highly capable text editor that gets the job done! It supports over 50 programing languages, opens large files significantly faster than the default Windows Notepad (mentioned below) and boasts a range of impressive features, including tabbed editing (thereby allowing you to work with multiple open files in a single window), split screen, auto-completion, macros, syntax highlighting, syntax folding and a whole host of other handy functionality!

Although sometimes completely overlooked, both Mac and Window operating systems both come with their own default text editors built in — and whilst they’re certainly not the best (having none of the refinements of their more fully featured counterparts), they’ll certainly do the job if all you’re looking to do is make a few simple edits…

Offering only the most basic text manipulation functions, such as finding and replacing text, Notepad (not to be confused with WordPad — which is NOT a text editor) is by far the most basic text editor listed in this article — with almost none of the handy features (syntax coloring, code folding, regular expressions, macros, block-select, etc, etc) found in just about all of its 3rd party counterparts!

Mac’s default text editor, TextEdit, combines features of a text editor with those of a word processor, such as rulers, margins, and multiple font selections — allowing it to be used as both a text editor AND a basic word processor — depending on the settings/preferences. Similarly to Notepad (mentioned above), it has almost none of the numerous features found in its 3rd party rivals. While it may well do the job for a basic edit or two, if you’re intending to edit server-side files on a regular basis, you’ll do a lot better with one of the free or premium options mentioned above. 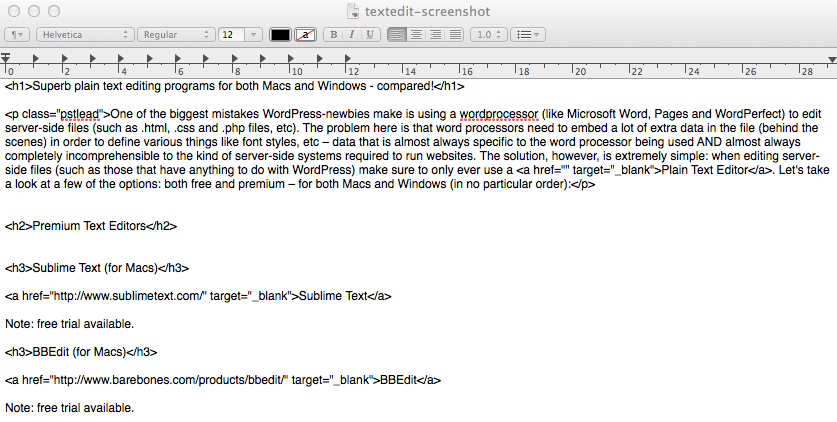 Wrapping up: How to Choose? Which is Best?

Well, first off: all seven of these text editors are built for coders and all seven are pretty darn awesome! What’s more, every one of them is available as a free trial — meaning you can give each a carefree whirl before deciding. If you’re a hardcore coder working in multiple languages you’ll probably appreciate some of the specific software development tools and high-end functionality (like multiple selections, split editing and project organization features) found only in some of the premium options (if this sounds like you then be sure to check out about the most popular premium text editing software available: Sublime Text) — update: serious coders should also be sure to check out the newest on this list: Atom — however, if you’re only a casual coder looking for a top-end text editor with basic features like syntax highlighting, macros and spell-checking, etc, then maybe start with say TextWrangler (a personal favorite of mine) if you’re on the Mac or Notepad++ if you’re a Windows user and see how you get on — after all, there’s really no need to pay top-dollar for features you’ll perhaps never use/need!

Note: For a comprehensive list of just about all the different text editors currently available check out this Wikipedia article.

Top tip: before editing any files, ALWAYS make a quick back up of them first: because there’s usually no going back once things have been overwritten without one!

Know of any other top text editors for Macs and/or Windows? Any preferences?

...on themes, plugins, hosting and more!